Kiruna is a city destined to keep being rebuilt.

Due to the threat of collapse to the existing settlement, much of the Swedish city of Kiruna, located deep inside the arctice circle, is to be demolished, and rebuilt two miles away. 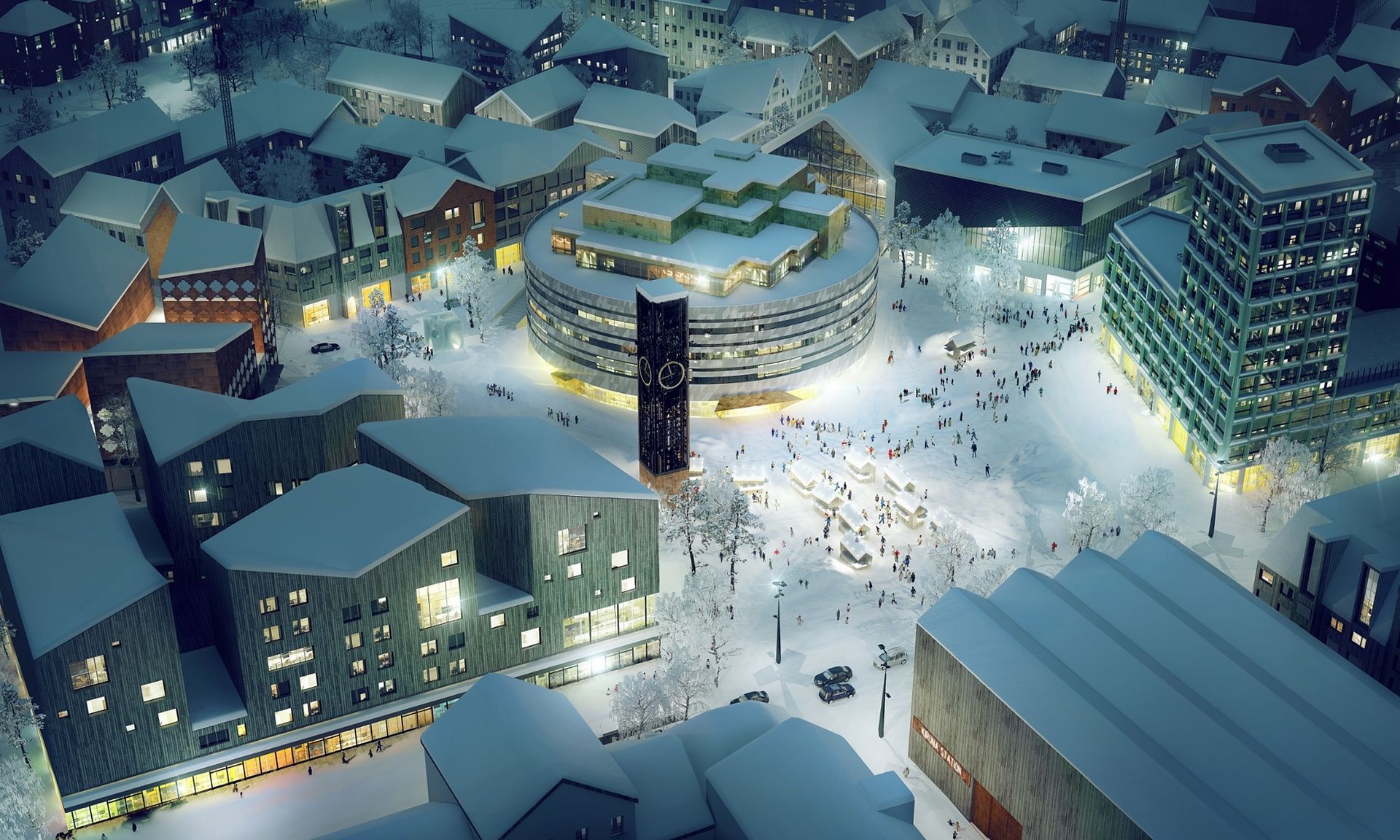 Subsidence caused by the mining activity, by state owned mining company LKAB, which provides the raison d'etre for Kiruna itself, has grown to the extent that the city is no longer safe.

"In a highly unusual case of urbanism, the whole town centre and its surrounding neighbourhoods are to be demolished – and rebuilt at LKAB’s expense two miles away, leaving behind some unaffected areas which will now become the western edge of the new city. The 3,050 homes that would be affected by the impact of the mining – in addition to shops, offices, schools, the city hall and the hospital – will all be bought by LKAB, knocked down and relocated. The process of moving the city will happen in phases, with the majority estimated to be completed by 2040."

I'm intrigued about how the process of moving from one city to another will unfold. Will some refuseniks remain in the old town, awaiting the inevitable slide into the precipice?

Tantalisingly, rebuilding Kiruna gives the city the chance to start again. Which city, given a chance, wouldn't like to begin over, to fix the mistakes of the past - those annoying bits of leftover infrastructure where things didn't quite connect properly: the quirky changes in material and style between buildings; the misaligned changes in level of the streetscape; that bridge at slightly the wrong angle. New Kiruna, Kiruna 2.0, is a chance to make it right.

Initial images of the first phase of New Kiruna, or Kiruna 4-Ever, as competition winning practice White Architects called their proposal, show a tightness of urban planning, a playful interlocking of contemporary buildings united by a crisp layer of snow. It’s a look that the old unruly town could never have achieved, while the mine looms over the old town as a portent of doom.

"The first phase of the masterplan is a new civic square, which will be home to Kiruna’s historic clock tower as well as a new travel centre (2018), facilitating connections between old and new, and a new city hall, The Crystal, designed by Henning Larsen Architects (2016). Phase 1 will also comprise a new library (2019) and swimming pool (2016) and by 2021 the Kiruna Church will be carefully demounted and reconstructed on the new

Kiruna's phased development "will allow the city to ‘crawl’ along a new urban belt to its new home". But what memories will remain of the old Kiruna?

In Sicily, after the town of Gibellina was destroyed by an earthquake in 1968, the new town of Gibellina Nuova was built 11 kilometers away. The site of the original city was turned into an immense artwork by the artist Alberto Burri, who encased the entire ruined city in concrete, a modern Pompeii. The buildings reduced to rubble, what is preserved are the traces of the old street plan, the craquelure of a painting scaled to the size of a town.

"And yet the Grande Cretto – which has finally been completed earlier this month, twenty years after Burri’s death – stands against the tendency of abandoned cities to be forgotten. What was broken by the quake is fixed in time. Burri’s final cretto is a momento mori because it preserves the energy of destruction."

In Gibellina the memory of the old town is preserved, the streets and buildings trapped in a Brutalist amber. The inhabitants of New Kiruna will only be able to watch as the town of old Kiruna is erased piece by piece, building by building, either by demolition or collapse into the mine workings.

The chance to start again

As a culture, we are drawn to creation myths. The superhero genre is particular creation myth is obsessed with the origin story, a tale that keeps being retold, a chance to retell the same story in a new way. In films, the reboot is a way to retell an old story in a new way. What if we could do the same with our cities? Will Kiruna 2.0 be cleaner, healthier, happier? 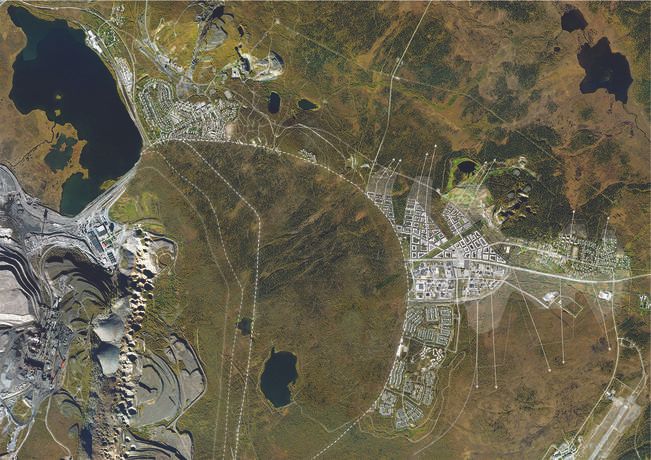 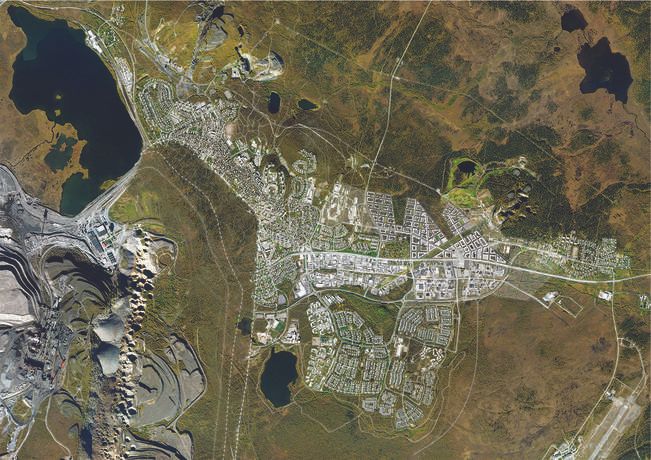 In Calvino's Invisible Cities, there is the story of Eutropia (Trading Cities 3):

"On the day when Eutropia's inhabitants feel the grip of weariness and no one can bear any longer his job, his relatives, his house and his life, debts, the people he must greet him, then the whole citizenry decides to move to the next city, which is there waiting for them, empty and good as new; there each will take up a new job, a different wife, will see another landscape on opening his window, and will spend his time with different pastimes, friends, gossip."

One can imagine that each new Eutropia is more refined than the last. The city approaches perfection. The video game SimCity allows us to construct a perfect city, and erase the bad parts or begin again if things don't turn out.

'It’s not the first time that Kiruna has had to demolish buildings for the mining to increase. “But never on this scale and never the city centre,” Peter Niemi, Kiruna’s municipal chief executive, tells me at the event. If the mining is set to continue, I wonder, is a move of only two miles enough to keep the town safe? “As far as we know,” Eva Ekelund, head of the department of land and development, replies, “but iron is under the new town centre, too.” So could the city move again in another 100 years? “It will be too expensive for LKAB to move the city again,” Peter says simply.'